Since I published my paper on spin orientations last year (Rodriguez et al., 2016 or my last post), I think I’ve managed to convince some people that the positive (or negative) values for the effective spins of merging black hole binaries could be a good way to discriminate whether the system was formed from stellar binaries in a galactic field or through dynamical processes in a dense star cluster.  There have been a couple of papers looking at the statistics of these events, and how many detections we might need before we can start to say where LIGO’s binary black holes are coming from.  These papers have also tried to pin down whether the spin distribution of the events LIGO/Virgo has already detected show evidence of spin alignment (indicating formation from a binary) or of a random spin distribution (indicating dynamical formation).  Of course, since most of the effective spins are also consistent with black holes having no spins, it’s been somewhat hard to make any definitive claims (e.g. Farr et al., 2016, which shows a weak preference for an isotropic distribution, versus the other Farr el al., 2016 which, using a slightly different methodology, shows a weak preference for a spin-aligned distribution).

The problem is that none of LIGO/Virgo’s binary black holes have shown evidence for significant black hole spin.  Only one of the systems, GW1512126, has had spins whose magnitudes could be easily measured.  Every other system, even the possibly-anti-aligned system GW170104, could have just as easily been non-spinning.  It’s pretty hard to measure the direction of a vector when its magnitude is almost 0.  For people who study isolated binary evolution, this provides a natural explanation for systems like GW170104: its entirely possible that heavy binary black holes simply aren’t born with significant spins.  If that were true, then most of LIGO/Virgo’s events could be explained through either channel.

But!  There’s a weird caveat here.  For a little while now, I’ve been studying the effects of post-Newtonian dynamics on the evolution of black hole binaries in the dynamical formation channel.  In other words, what happens when you have an encounter between three black holes, and you carefully keep track of all the relativistic effects (e.g. pericenter precession and gravitation-wave emission).  Turns out, if you look at this carefully, you can go from a vanilla dynamical scattering:

to something significantly crazier:

What the hell just happened there?  It turns out, during these crazy resonant encounters between black holes (which are all too common in dense star clusters), you can get two black holes so close together that they’ll form a highly-eccentric binary black hole which merges during the encounter.

When that happens, the two black holes form a new massive black hole (in red above), that immediately gets a kick to its velocity from the emission of gravitational waves.  Now for black holes that are maximally spinning (chi ~ 1), these merger kicks can be as high as 4000 km/s.  On the other hand, if the spins are small, the kicks can be as low as a few 10s of km/s.

Because people always assumed that black holes get large spins when they’re born, it was reasonable to believe that these merger black holes would get kicked out of the cluster pretty quickly.  After all, the speed needed to escape from a typical globular cluster is a few 10s of km/s.  But if the recent claim from the population synthesizers is true, that heavy black holes actually get no spins, then we could actually start to think about building up multiple generations of black holes in globular clusters!

My most recent paper, written with some new and some old collaborators, is the first in a series looking at exactly that.  It turns out that, when you correctly treat the post-Newtonian dynamics in a dense star cluster, you can get a ton of mergers occurring in the cluster.  If the spins from the first generation of black holes is low, then those merger products can even be retained in the cluster, and since the cluster will always form binaries out of the most massive black holes available, you can form binaries from the second generation of black holes: 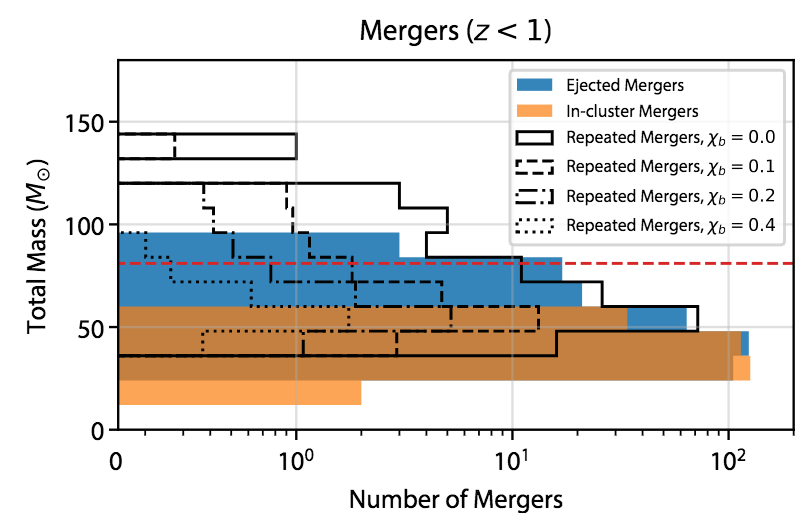 These second generation black holes will all have large spins (anytime you merge two black holes, they form a new black hole with a spin around 0.7), and they’ll be more massive than any of the other black holes in the cluster.  This last point is critical.  We think there’s an upper limit on the masses of black holes you can get from a single star.  Anything above that mass (around 40-50 solar masses), and the star completely explodes without leaving behind a black hole or anything else.  If that’s true, then you would only expect first generation black holes binaries to have masses of at most 40M+40M.  But if you’ve got second generation black holes, they could be twice as massive, forming systems with masses of 80M+40M.  Since those could only have formed through repeated mergers, I made the claim that if LIGO/Virgo detects something in the mass gap, then it almost certainly came from a cluster.  It was nice to finally have this in a paper, though I have been saying this for a little while: Looking at the histogram, these events should be pretty rare (and they depend critically on how fast the first generation of black holes was spinning at birth).  But I still have hope!  In LIGO/Virgo’s next observing run (O3), they’re projected to be sensitive to 80M+40M black hole mergers out to a redshift of 1 (nearly 8 billion years ago)!  This provides us with a pretty clear way of identifying the contribution of dynamics to merging binary black holes.  Either black holes are born with large spins, and eventually we’ll see something with anti-aligned spins, or they’re born with small spins, and eventually we’ll see something so massive it could only have formed in a secondary merger.  Either way, after a sufficient number of detection, we’ll have a pretty clear idea of how significant the dynamical channel really is.  Just how many is “a sufficient number” is what I’m working on now.