So it’s about time that I actually published something here, and this seems as good a topic as any.  As most of you probably know, LIGO, the Laser Interferometer Gravitational Wave Observatory, reported the detection of gravitational waves a couple of months ago!  Talk about a ridiculously exciting time to be doing what I do.  The gravitational wave, named GW150914, was created when two “heavy” black holes, 29 and 36 solar masses, merged about 400 Mpc from Earth.  In order to get stellar mass black holes in that mass range, however, you need to start with a massive star with a very low stellar metallicity (something less than 1/2 to 1/4 of the metal content of the sun).  Lucky for us, there happen to be large, gravitationally interesting balls of low metallicity stars in just bout every galaxy.  I’m talking, of course, about globular clusters.

This is what I’ve been working on for the past year or so: how many binary black hole mergers can LIGO expect to detect from globular clusters?  It turns out, the answer is somewhat higher than previously thought.  Last year, we published a letter in Physical Review Letters that suggested that LIGO could detect over ~100 binary black holes every year from globular clusters alone.  Of course, that number got scaled down a bit later (as noted in an erratum, because whoops), but even that was much higher than had been previously predicted.  The result even got picked up by I Fucking Love Science, which was super-fun, because I’d never seen one of my papers subjected to internet comments before.

That all happened in July of 2015.  In September 2015, LIGO detected GW1501914, which happened to have just the right mass that you would expect for something from a globular cluster.  So after that was announced in February, we decided to go back and see how exactly a cluster like the ones we see in the Milky Way would create a binary black hole like LIGO observed.  We just posted this on the arXiv (here) and it turns out that clusters might be one of the best ways to create a heavy binary black hole.

Unlike the other ways that you can create a binary black hole, however, the binary black holes from globular clusters are formed through dynamics.  That is, the black holes become concentrated in the center of the cluster, and can actually capture one another, forming a binary that gets ejected into space.  From our models, that looks a little something like:

But how many binaries like GW150914 can a cluster form?  Well we looked through our models, and extracted everything that looked like it could have created the binary merger that LIGO saw.  Out of 48 simulated globular clusters, we found 262 binaries with the same masses as GW150914, 14 of which would merge at just the right distance to be observed by LIGO.  We diagramed what that process looks like dynamically for a couple of the potential sources:

The density of black holes in the center of the cluster is so large, that any binary that forms will get knocked back and forth repeatedly: swapping partners, stealing partners from other binaries, until eventually the black hole binary that could have formed GW150914 gets kicked completely out of the cluster.  Then, it’s just a matter of time until gravitational waves drive the binary to merge where LIGO can detect them!

Of course, the actual question is: how many of these would we have expected LIGO to see, and how massive should they have been?  Turns out, for the 14 days that LIGO reported around the detection of GW150914, our models say they should have seen anywhere from 0.05 to 0.7 mergers (and 0.7 is close enough to 1 for an astrophysicist).  We also can predict that LIGO should have seen anywhere from 0.2 to 2 mergers in the whole 50 days that they ran the detector this time.  They may have detected 2 mergers, but we won’t know until they report the final results in a few months.

The nice thing is that we can predict the masses for any of the binaries that LIGO should see from globular clusters: 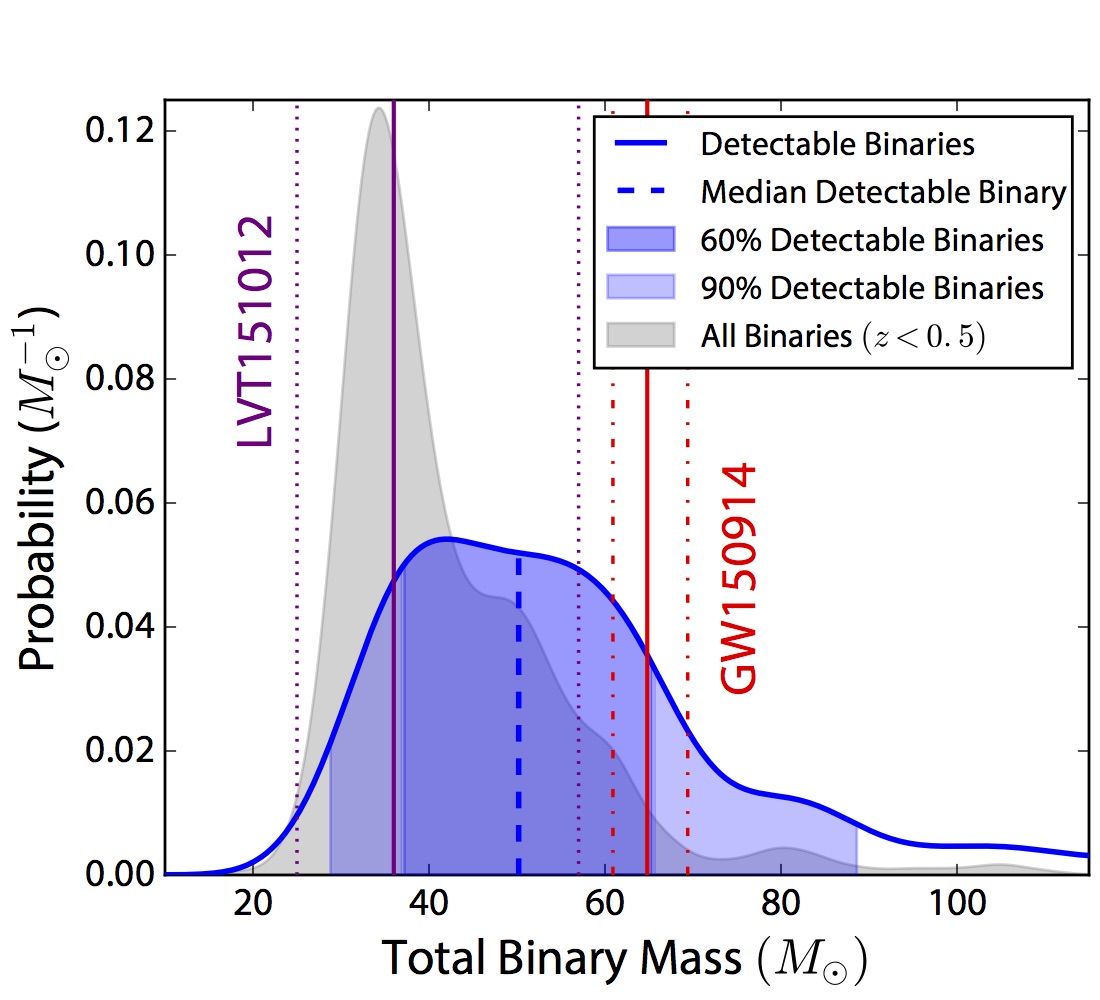 So the masses and distance of GW150914 are consistent with formation in a globular cluster.  Does this mean it definitely came from a cluster?  Well, no.  Unfortunately, we’re still not able to answer that yet.  But our models seem to show that LIGO can see ~100 mergers per year once they’re up to design sensitivity.  Ironically, the more massive black holes in our improved models have increased the detection rate from globular clusters back to where it was before I noticed the erratum-worthy mistake in the first letter.  In any case, now is definitely a good time to be a gravitational-wave astronomer!

EDIT: I got to give a TEDx Talk on gravitational waves and globular clusters